Should You Prepare A Will When You Have "Nothing"?

At some point in many American comedy or drama television series, the characters will almost certainly be involved in a “bequeathing” scene. A lawyer sits at the front of a room before a small assembly of people ready to bestow the posthumous gifts of an extraordinarily wealthy and/or eccentric individual. The room is always “stately” with mahogany wainscoting, a huge bookcase, and the dark colors of a would-be judge’s chambers. I am convinced they just change out a few things and use that standing set for judge’s chambers in other shows and episodes. Regardless, the image is set to give the appearance of great formality and expense. 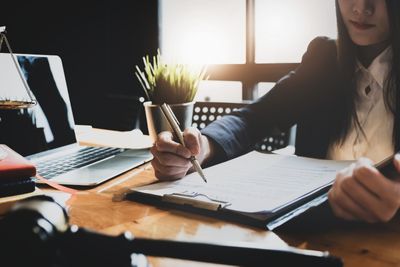 This caricature of Will probate has created a thought that Wills are only for people who have significant wealth to pass on after death. When this caricature is combined with the fear of attorneys and the legal process, many people will avoid preparing a Will or other estate documents. Instead, they provide a verbal Will declaring certain items to be given to someone after their. The following story is a warning against that very thing.

A semi-retired man, we will call him Robert, has decided to never own a home again. After a couple of divorces, no children, and estrangement from his family, Robert wants to enjoy his retirement as much as possible without the hassles of owning significant assets. Robert decides to rent a modest place and do a little bit of work to supplement his retirement income.

In the course of his work, Robert meets and begins to mentor a young entrepreneur. Over time, Robert begins to have a special relationship with this protégé and feels as if he finally has some family. Robert then prepares a Will to give his possessions to his protégé at death. Shortly afterwards, Robert endures a frustrating civil lawsuit. After this stressful experience and the memories of prior divorce, Robert destroys the Will. Robert believes that due to having minimal assets to give away, the best way to transfer his assets at death is to set up his bank accounts as transfer on death and tell the protégé to just keep everything else when he dies.

Unfortunately, Robert soon dies of an unexpected illness. When Robert’s landlord finds out about Robert’s death, the landlord contacts Robert’s next-of-kin and changes the locks on the rental property. Robert’s property he had wanted to give to the protégé and some of the protégé’s business documents and personal items are now locked in the dwelling.

In legal terminology, Robert has died “Intestate” – a fancy word for without a Will. Robert’s protégé is in for a frustrating legal process. The protégé will have to work with the landlord to get any of the protégé’s property from the dwelling. This will probably require some sort of release to protect the landlord if Robert’s estate were to sue for the property. The protégé may then have to force the intestate probate process for Robert’s estate to collect the property Robert promised to the protégé. In the probate process, the protégé will have to fight the statutory distribution of the property to family members and the state. In short, the hassles Robert attempted to avoid by destroying or not preparing a Will are now magnified.

Whether you have “nothing” or a significant amount of assets, preparing appropriate estate documents is the best way to communicate your wishes of what happens to your property upon your death. A few, well drafted documents can save a lot of frustration after you are gone. Had Robert’s Will been available, the protégé could have immediately begun the testate probate process and likely collected the property with less hassle. Without a Will, the protégé is left with great uncertainty and frustration. A Will for “nothing” is always better than nothing to combat uncertainty and frustration.